Where a member of the public believes that their, broadband or mobile phone service is experiencing radio interference this should be reported to the service provider. If the service provider determines that an external interference issue is occurring, it will contact Spectrum Intelligence and Investigations directly by submitting a case of suspected interference. In such cases Spectrum Intelligence and Investigations can only deal with the network operator and updates cannot be provided to third parties or members of the public.

Where a member of the public is experiencing disruption to Saorview or satellite television reception, a television reception system installer should check the installation for faults. System faults such as damaged cables & aerials are common sources of disruption to reception. Should it be determined that the disruption is caused by external interference, this should then be reported to Spectrum Intelligence and Investigations directly by submitting a case of suspected interference as per process outlined above.

Type A category would generally be exceptional in nature. Typically, such cases would have a severe impact on an operator’s ability to continue to provide a radio communications service and may result in a complete loss of service to users.

Cases falling into this category would need to fit the following general description:

Examples of Type A cases could include:

Type B cases would typically have the following general description:

Examples of Type B cases could include:

Matters falling under Type C would typically be queries of the following types:

Once an interference complaint has been resolved by ComReg or its agent(s), the following steps will be taken: 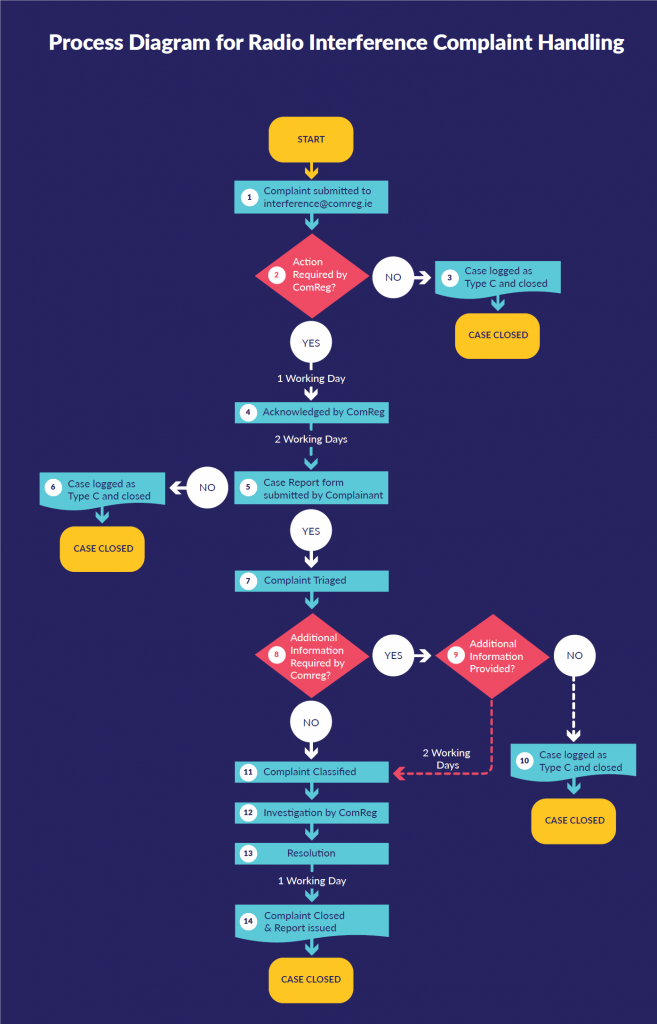