The Commission for Communications Regulation (ComReg) was established on 1 December 2002 and is led by a Commission of up to three Commissioners.

There are currently two Commissioners –  Garrett Blaney and Robert Mourik. 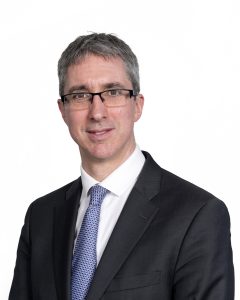 Garrett Blaney joined the ComReg as Commissioner and Chairperson on 07 January 2019.  He currently holds the title of Commissioner.

Garrett Blaney was previously a member of the Commission at the Commission for Regulation of Utilities since February 2010 and Chairperson from February 2014 to February 2017. In 2017 Garrett was elected the Chair of the ACER Board of Regulators (Agency for the Co-operation of Energy Regulators) and also the President of the Council of the European Energy Regulators (CEER).  Prior to becoming a Regulator Garrett had over 20 years of experience working in the energy industry. He was previously Strategic Development Director for Viridian Power and Energy, Commercial Director for Huntstown Power, Ireland’s first independent power producer, and Asian regional director for ESB International. 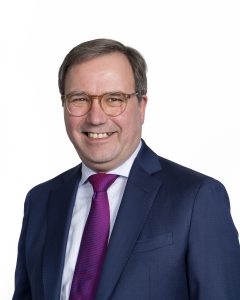 Robert Mourik joined ComReg as Commissioner in 2019. From 7 January 2022 he became Chairperson.

Robert has almost thirty years experience in the telecoms sector, as an industry executive and as Government official. Prior to joining ComReg, he worked for Cubic Telecom, a new entrant in the automotive IoT space, where he was responsible for all wholesale activities. Robert spent almost 10 years in Telefonica as the European Regulatory Strategy Director at their corporate HQ in Madrid and as Strategy Director in Ireland. He also worked for Vodafone Group, as its head of the Brussels Office and in the regulatory department in Newbury, UK. In 1991, Robert began his career in the Dutch Department for Transport and Telecommunication and from 1994 until 1999 he served, as Telecom Attaché at the Netherlands’ Permanent Representation in Brussels. He was a Member and Chair of the Council Telecoms Working Group in 1998 when the first telecom regulatory package was adopted. Robert was born in the Netherlands and studied Economics and Public Policy at the Erasmus University in Rotterdam, and the University of Hull (UK).

The Commission for Communications Regulation (ComReg) is divided into four Divisions, supported by the Director of Legal Services & General Counsel and the Director of Strategy and Economics. The structure is based on cross-functional teams operating in a multi-disciplinary environment. Click on the navigation on the left to see more information about our Management Team.